“Quit playing Minecraft and get back to hacking”
super:expert_guides:asm_stylesheet

A guide that helps you correctly writing and organizing your ASM code to optimize your workflow and keep you motivated! :)
Please note that this is NO ASM TUTORIAL!.
You have to know how ASM code works and how it is stored in the game's ROM in order to make use of this guide. Also don't take the example code I used too seriously, it's just for educational purposes, so it doesn't matter if it makes sense or not.

ASM coding became incredibly popular over the last years. I can very well remember the old vanilla hacks that were amazing long ago at the time when asm wasn't really a thing. Nowadays the amount of patches and asm resources has grown considerably, and every hack contains at least some hex tweaks or a new HUD. Naturally, the more ideas are presented in a hack, the more people want to come up with new ideas and code their own thing. The way these people write their code may be very different from each other, resulting sometimes in inefficient or just cluttered looking code that is not really viewer-friendly.

The goal of this guide is to give ASM coders an idea about how I think organized code should look like and how it helps you optimize it. Especially if you're going to release the source later, so other coders have to understand what's going on from a different perspective, which is not an easy task. Now you should know that this is by far no “official way to write ASM code”, you are free to do whatever you think is best.
I too am open for suggestions and improvements.
In this guide I will as well cover and if necessary expand ways to improve your workflow in regards to Super Metroid ASM coding, including what tools I'm using and how I disassemble large portions of code in a matter of minutes, xkas friendly using the tools listed below.

Anyway this introduction has been a bit long so let's get started!

1. Getting The Right Setup

Essential stuff any ASM coder should have before even reading this guide:

Tools recommended that once used you don't want to miss anymore:

Even more essential stuff and the reason I get out of bed every morning:

N++ is one of, if not the most versatile and popular code viewers out there. It supports lots of different programming languages such as batch or C++. If the language you need is not supported, you can simply define it nice and easy using the custom language feature. Lucky for you I already made one for SNES ASM so you don't have to bother.
To add the ASM language stylesheet, open up N++ and go to Language > User-defined (at the very bottom) Alternatively you can simply click the toolbar icon for it (it's a window with a lightning drawn into it)

In the opened window, click Import and select my stylesheet:

Now the default theme has a white background, which is a pain to the eyes (that's why I use an all black background) To change that, click Settings » Style Configurator, and under Select Themes, select a dark theme you like (I'm using black board) If you're still not happy with the slight blueish background or whatever color your theme's bg has, under Global Styles » Default Style » background color you can change it to black. Try to mess with it a bit, and when you're comfortable, let's continue with Part 2 of this guide!

The following example shows how I used to write code when I just got started:

… and this is a good example of how not to write your code. You can see it takes up lots of lines and overall is not very nice to look at. So instead of using one opcode + argument per line, try to use one event/statement per line.

A statement is a combination of opcodes and arguments, which creates either a check, performs an operation or causes any kind of change to a value and things such as RAM adresses and hardware registers.

an example statement would be an addition operation:

Now this can be organized to have the operation on a single line using colons as separators:

“What, you can actually do that?!” Sure thing you can!

Now what if there's a combination of the two like the one below?

Notice that the branch labels can be put into the same line right before the code without looking cluttered.
Though please avoid merging multiple statements all into one line like this:

Three statements make up this loop: Initializing X, calculating/changing an address value, and increasing/checking X), thus I used three lines.
Now there are some special cases of statements, especially when it comes to checking several bits in a respective order like button inputs or items:

For this there are multiple ways, one is using tabs/spaces for alignment:

Another way would be to simply give LDA $09A2 its own line:

Simple return statements (RTS, RTL) should have their own line, except if used with carry operations:

Status register changes (SEP,REP) as well as conditionless jumps (BRA, JMP, JML) should each be on a single line:

Stack operations should be put together onto a single line, for easy recognition of the order they are in (wrong order of pushing onto/pulling from stack is the most common reason for emulator crashes!):

There are three ways to define a branch in xkas that in the end do the same thing.
The first one requires you to know how many bytes an opcode's argument takes up (if it is using any) plus one (the opcode itself), also paying attention to 16/8bit mode:

But as you can see, this is quite awkward and would not really make sense, since xkas does calculate the pc offset for you using labels.
Also actually seeing the branch destination is always better, right? So the second way would be to simply be using labels to name the branches:

Alright, up to this point, that should be common knowledge, even for ASM beginners. Now if you have a ton of code and are tired of naming all your branches, there's a solution!
Xkas has a nifty feature that lets you use sublabels (+/- signs) for branches, depending on whether the branching direction is positive or negative.

This is a quote from the xkas help file. (which you should have read! Seriously if you didn't, just take a look, it's the .html file that's included in the xkas zip file!)
Now what does that mean exactly?

Let's assume you're using the above kind of loop several times.
It still would require you to think of appropriate and unique label names all the time so you don't get things confused. That wouldn't be the only issue, though.
You'd have to write the same label for each branch if your routine checks for a lot of things and branches to “GetOut:” like 20 times.

This is the loop example, but this time using sublabels:

Okay, now I'm perfectly aware that using them in a single loop is kinda lame and doesn't convince you, but what would you say if you can use + and - over and over again? Like this:

Awesome, isn't it? Okay this criss-crossing might look confusing at first, but try to understand where each of the branches go to.
Now what does “up to 3 levels deep” mean? It means that there can be multiple branch levels, so you have to use just as much levels for the sublables:

The same counts for - signs, and for going back in the pc count:

Please note that you can't mix the use of labels and sublabels, like this:

xkas will give out an error, saying negative branch too long, as it isn't able to calculate the location for - due to interference with a normal label. (At least as of version v.06, dunno if this has been fixed already)

You can use the brackets/braces { } to collapse code by clicking the [-] box on the left. Xkas will ignore them, so you're free to use them anywhere.

Not really much to say, except you should have as many open brackets as closed ones, else N++ won't collapse them correctly. By default, if you open a asm file in N++, everything is unfold. To fold/collapse all the text blocks, goto View > Fold All

Commentary is very important for getting and keeping a better understanding of what's going on. But it's easy to cross the line and soak your code with unnecessarily detailed comments about things.
It helps just about as much as having bareboned code without any extra word, no one's gonna read anything. However since I showed you the concept of one event/statement per line, it'll actually prevent you from doing so.

This code has too much info, which is only useful for absolute ASM beginners:

You notice that it doesn't need that much info, a simple comment about the event/statement itself is totally sufficient, but still better than none.
If you don't know how specific opcodes work exactly, feel free to ask, that's what Metconst is for after all!
Now again you don't HAVE to use comments, only if you feel things need a short explaination.

In the ASM stylesheet, xkas commands are blue, operators are teal (or red in previous versions).

Most commonly used commands are DB (Data Byte), DW (Data Word), DL (Data Long) and org (sets file position) org along with an optional label should always be put onto a single line, and if necessary be on the same line after the open brace to collapse the code that is following afterwards.

Defines are awesome and very helpful, though only if organized properly. This is how I used to write label definitions:

Having them like this is especially bad if you have a large file with tons of asm defines, so try to categorize and visually separate them: 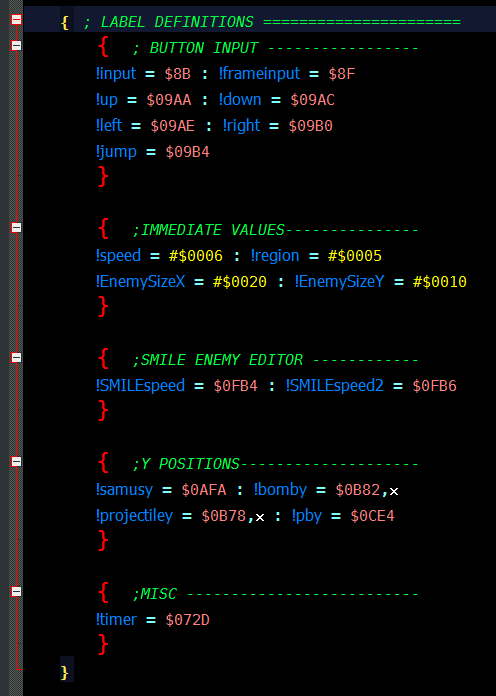 Instead of writing a bunch NOPs and ASLs all over the place like this:

But be careful at status register (SEP,REP) and 8 bit operations to not forget the '$' sign: